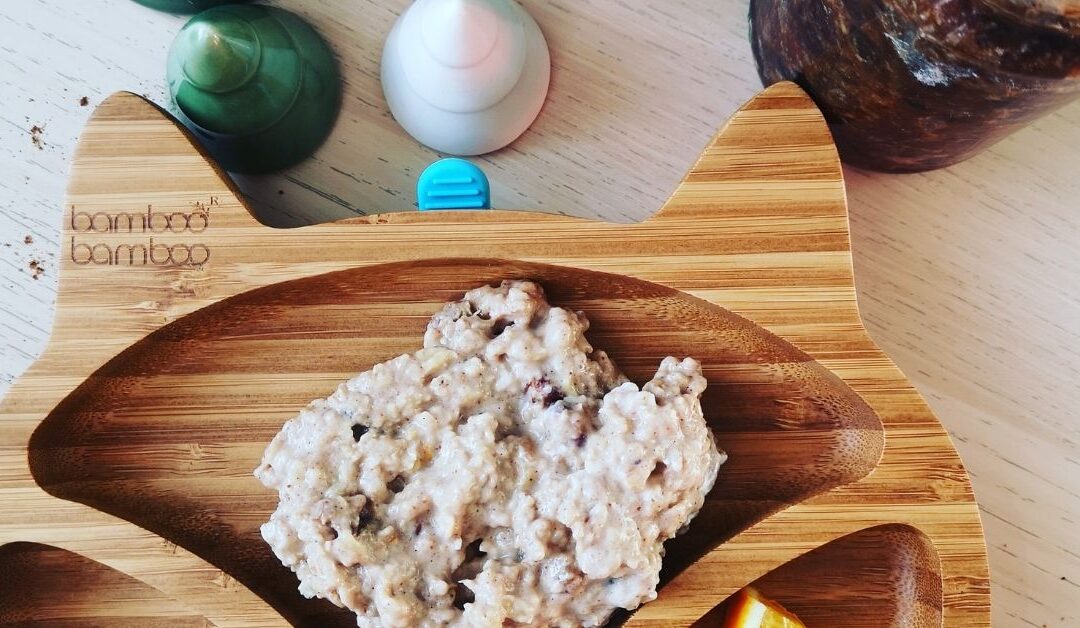 It doesn’t get much more festive than mince pies! Mince pie porridge gives ALL of the same feels (and smells) but it suitable for even the smallest of elves!

I’m a fan. However, I appreciate that they’re not to everyone’s tastes. Every October, I get the kids to help me make mincemeat, and the house fills with amazing Christmassy smells straight away. Maybe it’s because they’re involved, but three out of the four of them now love mince pies as much as I do!

Mince pie porridge usually involves stirring mincemeat through porridge. And that’s fine for older kids but not for babies
The great thing about this recipe is it has the feel of mince pies but without the added sugar (and the alcohol)

I’ve used porridge here because I think the oats’ texture works well with the dried fruits. And because it’s more likely that you’ll want to share a bowl of porridge with your baby than a bowl of Ready Brek. But if you’re a Ready Brek eater, no judgement!

Ready Brek is generally great for babies breakfast as it’s got the goodness of oats but in a nice smooth texture and with the benefit of being fortified with iron and calcium. So, porridge oats or Ready brek for this one, the choice is yours?

LEARN MORE: Simple baby breakfast ideas that you can share

Is it OK for my baby to eat almond butter?

You can introduce your baby to tree nuts, including almonds at any age. Just make sure to offer only a little at first and not offer two potentially allergenic foods for the first time on the same day.

Why can’t I add honey or maple syrup to my baby’s porridge?

Honey and maple syrup are added sugar, just like regular table sugar. And it’s better to avoid added sugar until your baby is at least one year of age. Honey should also be avoided in babies under 12 months because it may cause a form of infant botulism.

On their own dried fruits like raisins, sultanas and cranberries can be a choking hazard. They’re also sticky and get glued to baby teeth. However, when they’re cooked into the porridge, they will soften (you can also mash for a younger baby) and become less sticky and less of a choking risk.

What milk can I use if my baby is allergic to cows milk?

If your baby can tolerate soya milk, use fortified soya milk. If your baby is allergic to soya and cows, milk fortified pea or oat milk is the next best choice.